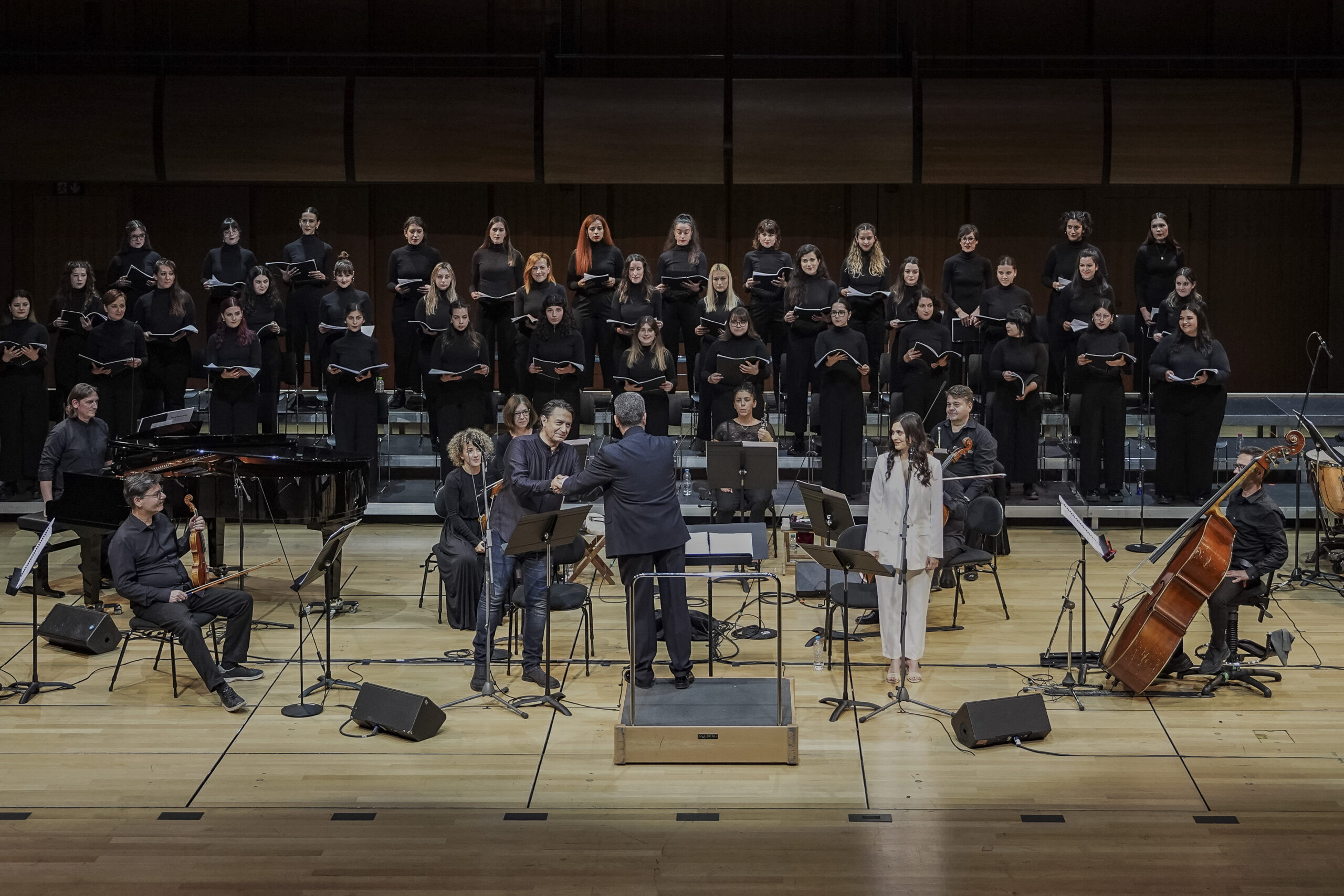 Lyric images of Mikis Theodorakis’ timeless songs are presented on the Greek National Opera Alternative Stage in a unique concert, as part of the three-year tribute cycle to Mikis Theodorakis. The concert titled Mikis Theodorakis: Lyric Images, arranged by Yannis Belonis, conducted by Elias Voudouris and sung by Yannis Kotsiras, will be held on the GNO Alternative Stage at the Stavros Niarchos Foundation Cultural Center on 12, 13, 14, 15 May 2022, as part of the tribute to the bicentennial of the Greek Revolution.

The concert programme includes snapshots from Mikis Theodorakis’ forty-year-long career in songwriting, theatre and cinema, revealing another side of this great composer: more lyric, more inward-looking and sensitive, far from the stereotype of a robust “theodorakism”. The concert also features singer Nefeli Fasouli, the chórεs female vocal ensemble and a ten-member instrumental ensemble.

Despite the indomitable diversity of Mikis Theodorakis’ mammoth catalogue of works, there is no doubt that song was, from the end of the 50s onwards, the hegemonic form through which the composer influenced the musical (and political) life of the times he lived in, always in the spirit of his visionary communication with a certain (peculiar and seasonal, as he himself admitted) perception of the concept of the people. A large part of his songs has been inextricably linked with the struggles of the Greek nation during difficult times in its history, cinematic hits such as Zorba the Greek and the internationally unprecedented venture of blending high and popular culture, something Theodorakis strived for through the combination of modernist poetry with the living tradition of popular music – a venture that marked and, in part, defined the course and tradition of what is still called “Greek song.”

Yet, there also exist some songs written by the composer that are less regularly recalled and performed; they reveal another face of Mikis Theodorakis, more lyrical, more introverted and more sensitive. There, the composer sings the praises of love, nature, children and dreams, and comes face to face with the emotional impact of alienation, death, and frustration. In these works, Theodorakis still depends on texts by major poets and lyricists (such as Manolis Anagnostakis, Kostas Virvos, Michalis Ganas, Nikos Gatsos, Manos Eleftheriou, Odysseus Elytis, Yannis Theodorakis, Iakovos Kambanellis, Tassos Livaditis, Lefteris Papadopoulos, George Seferis, Kostas Tripolitis, Dimitris Christodoulou etc.) – although the line between “poetry” and “lyrics”, as well as that between “composition” and “songwriting”, has never been more blurred than in Theodorakis’ oeuvre.

Fellow-travelers on this path are the arranger Yannis Belonis, great connoisseur of Theodorakis’ oeuvre, long-standing pianist in the Mikis Theodorakis Orchestra and close collaborator of the composer over the last 15 years of his life; conductor Elias Voudouris, who ranks among the most important ambassadors of Mikis Theodorakis’ symphonic and operatic oeuvre; and Yiannis Kotsiras, the composer’s personal choice for various prominent works of his and an elect member of that group of well-loved performers for whom the concept of “the popular” was historically overdetermined by the catalytic influence of the tradition deriving from Theodorakis’ work.

With the participation of Nefeli Fasouli and a ten-member instrumental ensemble.